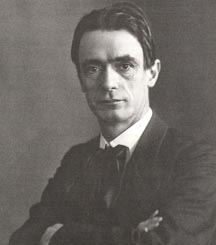 Rudolf Steiner (1861-1925) studied mathematics, physics and philosophy in Vienna and in 1891 earned a doctorate at the university in Rostock, Germany with a dissertation on Fichte’s theory of knowledge. Between 1888 and 1896, Steiner was editor at the Goethe Archives in Weimar and there wrote introductions and commentaries to four volumes of Goethe’s scientific writings, as well as two books on Goethe’s theory of knowledge (1886) and worldview (1897), in which he developed Goethe’s phenomenological approach to the study of nature. The book Steiner considered his most important philosophical work, Philosophy of Freedom, appeared in 1894.

In 1913 Steiner founded the Anthroposophical Society, and that same year building began on the Goetheanum in Dornach, Switzerland, as an organizational and cultural center, where Goethe’s Faust has been performed regularly. In 1919 the first Waldorf school based on anthroposophical thinking opened in Stuttgart, Germany. In 1923-4 Steiner founded the School for Spiritual Science at the Goetheanum, an open university for study and research in fields of natural science, philosophy, literature, sociology, economics, agriculture, medicine and education.

In 1924 Steiner responded to requests by farmers in eastern Germany concerned about falling fertility of chemically farmed soils and declining animal health. He laid the foundations of what is later known as Biodynamics in a series of eight lectures known as the Agriculture Course. Steiner explained that continued applications of chemicals in the form of fertilizers and pesticides had destroyed the soil micro-biological life and that farmers had lost the traditional understanding of what life is. He urged farmers to restore humus levels by composts and biodynamic preparations, and he called for an holistic view of agriculture conceiving of soil, farm, and cosmos as one integrated organism manifesting life force, or spirit. The followers of Steiner (Maria Thun, and others) developed a lunar-astronomical calendar to determine planting cycles following the rhythms of the sun, moon, planets and stars.

Biodynamics laid the groundwork for the world-wide organic movement, pioneered food certification, and fostered Community Supported Agriculture (CSA), based on associate economics. As a system of ecological and sustainable farming, Biodynamics revives the Aristotelian concept of oekonomia, which literally means “stewardship of the household,” a household which Steiner understood to include not only the farm itself but also the larger ecology and community as well.