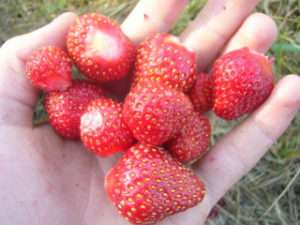 Today we’re bringing you another look back to September with a week’s report from Henning and Elizabeth’s Lopez Bounty Food Experiment. Lopezians are still eating locally and sharing their experiences – check out the latest installments to learn what Lopez has to offer during this beautiful season.

Monday:  Over the weekend, we had a visit from a young woman, Sylvan Zimmerman, a former co-worker of Adam’s at Wintergreen Farm in Noti, Oregon (before he came to S&S Homestead to serve a two-year apprenticeship in biodynamic agriculture). Over the years, Sylvan had discovered that too many small-scale farmers did not make it financially because they lacked skills to keep good records or think in economic terms; so now she is taking a break from farm work to earn certification as a public accountant at Portland State University. “I want to learn how to farm smarter,” she said, “and I want to teach other young farmers those skills.” Smart indeed!

For dinner, we had leek and potato soup (besides the vegetables, the soup featured beef broth, butter, fresh and sour cream, plus herbs – all from the farm), together with a slice of home-made sour dough rye bread and butter. For the recipe, see The S&S Homestead Food Book at  https://www.sshomestead.org/Publications (water color illustrations by Kelley Palmer-McCarty, 2009).

Tuesday: On Tuesday, we had another visitor, Kelly O’Hearn, livestock manager at Hawthorne Valley Farm in Ghent, New York, a 400-acre, diversified, biodynamic farm established in 1972 to support a Waldorf school offering early childhood education through high school, and environmental education to the public (see www.hawthornevalleyassociation.org). Kelly was interested in our farm management combining economic and educational programs and goals, and we discovered many similarities as well as differences arising from the differences in scale.

Wednesday: Wednesday was again the apprentices’ night to cook, which they did in great style: meat loaf, collards, sweet corn, roasted potatoes, yams and other root vegetables, herbs (everything home-grown).

Thursday: Baking Day and Henning’s turn to cook dinner: chuck roast simmered   with onions, carrots and roasted garlic in a cast iron pot in the out-of-doors baking oven, together with steamed beets in a sweet-sour sauce made from home-made apple cider vinegar, flavored with cloves, salt, a pinch of sugar and thickened with a little cornstarch (recipe found in Joy of Cooking, 1975, p. 290), and served over mashed yams flavored with garlic, salt and butter. Followed by a green salad, garnished with tomatoes and cucumber (all ingredients except salt, cornstarch, sugar, and olive oil for the salad, grown on the farm).

Friday: Strips of left-over roast served in a fricassee sauce made from the yam broth from the day before thickened with a touch of flour, butter, egg yolk, and cream, and seasoned with a splash of white wine (from a German recipe from Henning’s family), mashed potatoes flavored with cream, salt, and garlic, and green salad (all ingredients, except salt and wine, from the farm).

Saturday: As almost every year for the last two decades, we attended the end-of-the-summer juggle fest at Carol Steckler and Al Lorenzen’s  Hummel House to greet neighbors and friends. Unfortunately Carol and Al were absent (on an unscheduled trip for a family reunion), but dinner was delicious as always: grilled salmon, baked potatoes, garlic-and-butter bread, green salad, all ingredients sourced locally.

Sunday: At dawn, Dan Drahn and Henning went fishing again at Hummel Lake: fish rising to feed on insects under low fog banks hovering over the silvery water; a heron gliding mysteriously through the still air like an ancient dinosaur; finally, the sun bursting blindingly over the trees to the east. As luck would have it, Henning landed a handsome trout, large enough to feed us for dinner. It struggled against the cruel hook and then lay still at our feet after Dan quickly pierced its brain with a sharp knife. At night, we fried the fish in butter and lemon juice, and served it with new potatoes, green salad (all ingredients, except the lemon and the fish, of course, from the farm), and a glass of white wine.

High school farm class (“Farm, Food, Sustainability”): on Monday, the class picked up rocks in the two-acre field to be planted to winter rye this coming week, and learned about the historical glaciers which covered all of the San Juan Islands some 10,000 years ago, leaving behind the rocky debris characteristic of our island soils; on Thursday, the class learned to use hand carders to prepare sheep fleece for the next step, which is spinning using drop spindles to be constructed by the students in the farm workshop.

Bees: As we wrote last week, our bees are housed in a Top Bar Hive, which means that you can’t add a super on top when the hive seems crowded with a growing population. Watching the bees filling the entire hive with combs, and seeing a large cluster of bees at the entrance furiously fanning, we wondered whether lack of space might induce them to swarm this late in the season, but were assured by a beekeeper with more experience than we have that the massing of fanning bees at the entrance was merely the sign that they were ventilating the hive, and that comb construction would subside once the hive was completed filled. Whew! What a relief!

The Grapes are ripening in the warm days of September, but will not reach mature flavor until the first nip of frost. We usually eat them fresh, but because the harvest is so plentiful this year, we will not only make grape jelly, but try to desiccate some into small raisins, and ferment a portion into grape juice.

We harvested twenty pounds of Orcas and Rescue Pears from two small trees in their second year of fruiting. Both trees are heirloom varieties originating in the San Juan Islands. We are also in the process of harvesting several hundred pounds from a large Asian pear tree planted many years ago. To deal with the plenitude, we will dry a lot of the Asian pears in a dehydrator.

Our Jersey bull, Freyr (named after the Nordic god of fertility), was injured in the act of mating, hurting his spine. We segregated the animal, hoping he might recover or else be slaughtered, but he died soon. We will remember him for his gentle beauty which survives in the calves he sired over the last two years.

Until we can raise a replacement Jersey bull, Freyr’s duties were taken over by Sigurd, a bull from a line of Simmental-Angus crosses we have been breeding on the farm for some twenty-five years. Sigurd is only a little over a year old but quite eager to prove his mettle, as he did yesterday, when one of the dairy cows, a Jersey named Circe came into standing heat.