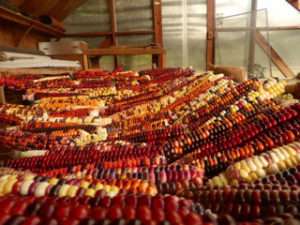 Here’s the last word from Henning and Elizabeth about their September of local food. Check in with the Lopez Bounty Food Experiment to read other islanders’ accounts of life on a Lopez-only diet.

Monday: We had a visit by Linda Lyshall (district manager, San Juan Islands Conservation District) and Candace Gossen, a PhD in ecological sciences newly hired by the CD as energy program coordinator. In collaboration with the Energy Leadership Team and Islands Energy, and sponsored by Opalco, the CD is engaged in a multi-year project to supply public schools in San Juan County with solar energy through community investment, and develop a long-term San Juan County sustainable energy plan (see http://sanjuanislandscd.org/energy/). The purpose of Linda and Candace’s visit to S&S Homestead was to learn about our farm-based systems as solutions for holistic water, energy, and food production and education. For more on our rain water catchment system impounding 750,000 gallons annually, see https://www.sshomestead.org/sites/all/files/file/Solar%20Micro-Irrigation.pdf, and on our photovoltaic system producing 16-20 kw annually, see http://www.opalco.com/?s=henning+sehmsdorf.

Dinner: Sirloin steak, baked potatoes, steamed broccoli (all ingredients, except for salt and spices, from the farm)

Thursday: Baking Day! After baking the usual sourdough rye bread (using farm-raised rye flour), we splurged on baking pizza in our outdoor oven and invited some special folks, including beekeepers who helped us get bees this year: Eric Hall and Elf Faye, and Irene and Zack Blomberg, and their daughter; and cheese makers: Andre Entermann and his wife, Elizabeth Metcalf, from Sunnyfield Farm, and Bruce Dunlop and his wife, Debbie Young, from Lopez Farm; plus some folks from our church, together with our apprentices, Adam and Deanna, and intern, Janie. The organic white flour for the pizza came from Blossom, but the cheese and vegetable toppings, as well as the fixings for the green salad, and the fresh fruit for the dessert pie, were from the farm. The beer was purchased at LVM.

Friday: Cream of cauliflower soup made with beef broth, milk, celery, onion, garlic and, of course, cauliflower (all from the farm), served with a slice of sourdough rye bread, butter, and a glass of wine.

Saturday: Texas Hash made from hamburger, green pepper, onion, tomatoes (all ingredients home-grown), baked in a loaf pan together with rice (from Blossom).

Sunday: Our main meal on this day was brunch rather than dinner. Henning went fishing with Dan again, but with the sun rising later, the fish were not ready to rise yet, and the fishermen did not catch any. Instead, Dan and Terry Drahn, their daughter Anha-Kate, and her friend, Ashi Bartolucci, came to church with us, and then to our house for a meal of egg, potato, zucchini, green and red pepper, onion and bacon frittata, served with sourdough bread, butter, fruit bread, Asian pears, and tea. How sweet it is to break bread with good friends on a sunny autumn afternoon in your garden! 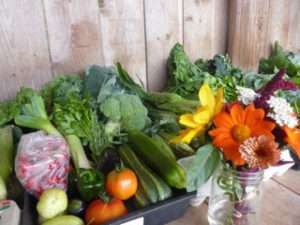 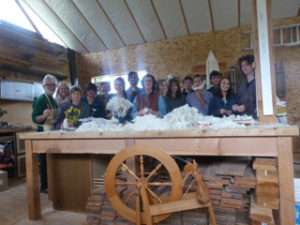 High School Farm Class (“Farm, Food & Sustainability”): On Monday, we worked with the students in the orchard, harvesting apples and pears, and Henning explained the analogies between the biodynamic practice of using homeopathic dosages of certain fermented vegetable-based composts, and the practices of Chinese medicine based on the idea of the chi. On Thursday, we continued instructing the students in how to turn sheep fleeces into spun wool, carding the wool, and spinning with drop spindles, which we first built in the workshop. Next they will learn how to use a spinning wheel, and after they have spun sufficient yarn, how knit or crochet.

Indian corn: This week, we harvested enough Indian corn to keep us in corn meal and polenta until next year. Our favorite recipe, corn griddle cakes, involves soaking the corn in water and soda for 48 hours, cooking it until soft, and blending the corn, sauted bacon and onion, eggs, some flour, salt, pepper, garlic, and red pepper flakes, in a food processor, and browning the soft batter in a skillet. Yum!

Rye: After completing subsoiling and removing tens of tons of rocks from the two-acre field last week, this Tuesday, we seeded winter rye and spread fish bone fertilizer to make up for the destruction of the soil fertility by mechanical cultivation. The one-acre barley field harvested last month was left in stubble and weeds as a cover crop, which will be plowed under next spring and planted to oats or wheat. Given the alternation of warm weather, sun and rain, and sun again, the rye seedlings were already two inches out of the ground by Saturday.

Wheat: On Saturday, we seeded two smaller plots, one 3,500 square feet, the other one tenth of that, with two varieties of winter wheat. The first variety, MDM, had been released by the WSU wheat breeder, Dr. Steven Jones (now director at Mt. Vernon Agricultural Research Station) several years back after he successfully crossed pre-Green Revolution varieties to improve productivity without resorting to modern gene-splicing involving radiation or chemicals to induce mutations. The second variety, Darwin, an heirloom seed in the public domain, came to us through O.J. Lougheed, who is well known on Lopez Island as an expert on ancient wheat seeds that antedate the kind of modern crossbreeding that has created significant changes in the rate of gluten proteins in modern wheat that account for the explosion of inflammatory diseases (such as gluten intolerance and celiac disease) since the 1960s. Over several years of growing the seeds, we have bulked up the small quantities received, and by next year will have enough to produce sufficient whole wheat of the kind that will not give us, or our CSA customers, the dreaded “wheat belly.”

Succession planting: This is the time of year when we harvest all manner of edible crops and replace them for the winter with cover crops (typically winter rye, vetch, and clover) in order to replenish the soil nutrients, add organic matter, and protect the soil surface from damaging winds and rain. After we turn the cover crops into the soil next spring, the beds will be ready for the next season without any further fertilizer other than the biodynamic sprays, which are really not fertilizers, but homeopathically stimulate the soil metabolism.

Parting thoughts: As this month of blogging for the Bounty Food Experiment comes to an end, we reflect on the more than four decades the family has been growing food for our daily table. As long as Elizabeth and Henning had full time jobs teaching in Seattle, we raised fruit and vegetables year round on less than one quarter acre on Lopez Island, and in the summer had chickens for eggs and meat, rabbits, and ran a cow-calf pair on a neighbor’s land in exchange for help with the haying. During the last 20 years, the farm has grown to 50 acres and has become highly diversified, committed to the idea that the agricultural enterprise should not only be economically viable but produce its own inputs: food, feed, fertility, energy, water, wood. Our experience shows us that small-scale homesteading is a wonderful way to ensure personal, community and ecological health. How many small farms like ours would it take to feed every man, woman, and child on Lopez Island?